September 22, 2022
Such vicissitudes might have deprived his life of imperial glory, but the relics unearthed from his tomb tell a different story, revealing a dynasty's grandeur. 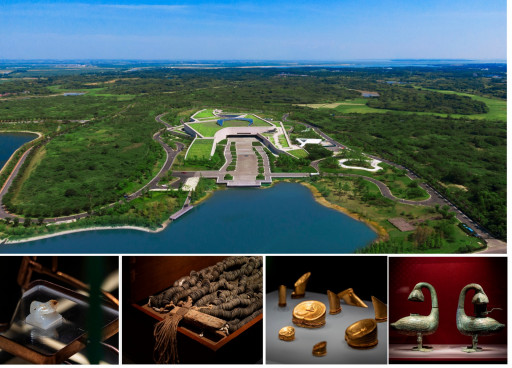 Tomb of Marquis of Haihun
One of China's top 10 archaeological discoveries in 2015, the tomb has yielded the largest number of relics, boasting of the most variety and the finest craftsmanship in Jiangxi.

Dethroned after 27 days, the shortest reign among Western Han emperors, Liu He (92-59 B.C.), master of the Haihunhou Tomb, was banished as a commoner and later allowed to reside near a lake and given the title of the Marquis of Haihun. He died in his early 30s, reports People's Daily Online. Its reporting team visited the site and interviewed a leading researcher.

Such vicissitudes might have deprived his life of imperial glory, but the relics unearthed from his tomb tell a different story, revealing a dynasty's grandeur.

The tomb near Nanchang, capital of east China's Jiangxi Province, turns out to be the best-preserved Western Han Dynasty (206 BC - 24 AD) cemetery ever found, with the most integrated structure, distinct layout, and complete sacrificial system.

One of China's top 10 archaeological discoveries in 2015, the tomb yielded the largest number of relics, boasting of the most variety and the finest craftsmanship in Jiangxi.

Among the relics, including gold, bronze, and jade artifacts, archaeologists discovered a broken lacquer "screen" in the main chamber of the tomb and restored two portraits, one of which is believed to be the earliest portrait of Confucius ever found in China.

Also unearthed were more than 5,000 pieces of bamboo slips of Confucian classics, indicating the prevalence of Confucius' teachings among the royals more than 2,000 years ago. The Qi version of The Analects of Confucius, which had been lost for about 1,800 years, was found in the unearthed bamboo slips, which have been subject to infrared scanning and are ready for further study.

Liu was the grandson of Emperor Wu, whose reign ushered in a prosperous period of the Han Dynasty that is believed on par with the reign of the first emperor of the Qin Dynasty.

"To know Emperor Qin and his dynasty through archaeological artifacts, one can turn to Terra-cotta Warriors. Nevertheless, before the Haihunhou tomb, there were not many artifacts for an in-depth study of Emperor Wu," Yang Jun, a researcher at the Institute of Cultural Relics and Archaeology and a leading archaeologist, told People's Daily Online.

In Yang's view, the Haihunhou tomb shed light on the mightiness of the Han Dynasty as all treasures bearing the mark of the marquis had been buried with him.

The 4 million unearthed Wuzhu bronze coins, weighing more than 10 tonnes, attested to the dynasty's opulence. This finding is the first hard evidence of the Chinese using a string of 1,000 coins as a monetary unit, pushing the original date back 600 years.