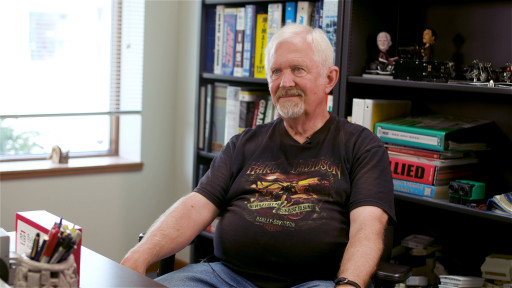 
KMC Controls®, an industry leader in building automation, is at once delighted and saddened to announce the retirement of Chris Kreuter, an innovator whose career spanned more than 50 years with the company.

In the late-1960s Ken realized an opportunity to form his own company. "My dad wanted to design a line of controls of our own," explained Chris, "and that's what we started doing. We built molds and dies to make our own parts and our own controls."

At the company's inception, Chris worked in partnership with his father, two of his brothers, and future brother-in-law. "I was making parts on a lathe and also on a punch press when I was a teenager," recalled Chris, three of whose brothers continue to work at KMC. Together, along with other family members lending a hand when and where needed, they fashioned parts and equipment to Ken's designs in a three-car garage. "We used to work 12, 14 hours a day if we had to."

In the mid-1970s, the young company relocated from Winnipeg, Canada to Thief River Falls, Minnesota. By the 1980s, manufacturing split off and moved to a site in New Paris, Indiana. By the close of the decade, the company had consolidated its engineering and manufacturing operations to its expanded facility in New Paris.

A small sampling of HVAC hardware he helped develop include wall-mounted sensors, the proprietary line of KMDigital controllers, the Conquest series of BACnet controllers, and the Company's new Indoor Air Quality line of controllers and measuring devices, not to mention a system for coupling an actuator to a valve or damper, for which he holds a patent.

In his more than five decades in the business, Chris has witnessed firsthand sweeping changes in technology and how it is applied to facility controls. "We went from pneumatics [controls that use compressed air as the signaling medium] to computer electronics on all aspects of a building," he said. "That was the biggest change I've seen."

In that same time span, KMC Controls has managed to grow while remaining true to its origins as a family-owned business committed to innovation and to the success of its customers.

Today, the original machine shop has given way to a state-of-the-art tool and die facility under the same roof as the engineering department and factory floor. Having all those capabilities in house remains one reason the company can take a concept from drawing to working prototype in a fraction of the time it takes other manufacturers in the controls industry.

Looking ahead, Chris said he looks forward to having more time for his hobbies. "I'll probably do a lot more hunting and fishing," he said. A pilot who has logged more than 4,000 hours in the air, he is also an avid vintage motorcycle collector.

Looking back, said Chris said he enjoys the friendships he's made at KMC. "Good folks here," he said. And he plans to check in on them at KMC from time to time. After all, it's another opportunity take one of his 1930s- and 1940s-era Harley Davidson cruisers out for a ride.

Facebook
Twitter
Pinterest
WhatsApp
Previous articleSuzie’s CBD Treats Showcases New Products and Booth at SuperZoo 2022
Next articleAuthor King Tarantino’s New Book ‘Leveled: Cartridge 1’ is a Suspenseful Tale Filled With Adventure, Magic, and Science Where a Male Teen May Turn Out to Be a Hero
Lifestyle