September 1, 2022
The Vilcek Foundation has partnered with artist Hiroki Otsuka on the third in a series of biographical manga celebrating outstanding immigrants 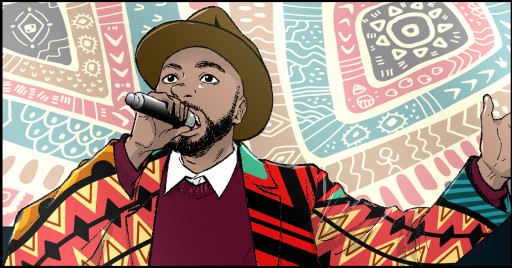 The Vilcek Foundation has published a new manga biography celebrating the creative roots of Ghanaian-born artist Samuel "Blitz" Bazawule. A musician, visual artist, filmmaker, and novelist, Bazawule received the Vilcek Prize for Creative Promise in Music in 2013. The Vilcek Foundation Prizes recognize outstanding immigrants and honor immigrants' contributions to the arts, culture, and society in the United States.

The manga comes at a time when Bazawule's work is reaching more audiences than ever before. His debut novel, The Scent of Burnt Flowers, was published to critical acclaim in June 2022. Bazawule also recently wrapped filming on The Color Purple, a new full-length musical drama based on Alice Walker's 1982 novel.

"With each new medium Blitz explores, his creative vocabulary and reach expand, adding new layers to the stories he shares with audiences and readers," says Vilcek Foundation President Rick Kinsel. "It has always been the foundation's intention that our Creative Promise Prizes could catalyze growth and new developments for the young artists who receive them. Blitz's trajectory since his receipt of the prize demonstrates the influence that a meaningful investment in artists can have on their career."

Following his receipt of the Creative Promise Prize, Bazawule tried his hand at filmmaking, with short films and his debut feature, The Burial of Kojo in 2018. In 2020, Bazawule was named a Guggenheim Fellow; later that year, millions would see his directorial work on Beyoncé's Black Is King, for which he received a Grammy.

The manga is the third in a series of visual biographies produced as a collaboration between the Vilcek Foundation and artist Hiroki Otsuka. The series celebrates notable immigrant artists and scientists living and working in the United States. Previous editions highlighted architect and urban planner Denise Scott Brown (b. Zambia) and molecular biologist Mohamed Abou Donia (b. Egypt).

The full manga is available as a free download from the Vilcek Foundation. Through this engaging visual format, the foundation aims to celebrate the importance of immigration in a format that is accessible to readers of all ages.

Read the Manga: Sample Culture and the Imaginative World

The Vilcek Foundation raises awareness of immigrant contributions in the United States and fosters appreciation for the arts and sciences. The foundation was established in 2000 by Jan and Marica Vilcek, immigrants from the former Czechoslovakia. The mission of the foundation was inspired by the couple's respective careers in biomedical science and art history. Since 2000, the foundation has awarded over $6.6 million in prizes to foreign-born individuals and has supported organizations with over $5.8 million in grants.