September 29, 2022
Recent release "Economics 101 for Senators and Representatives: President Obama's Legacy of Deficit Spending and National Debt" from Covenant Books author Wallace Hoffman discusses the ways in which policies and laws passed during the Obama administration's time in office led to a growing national debt, affecting the average American's wallet and daily lives. 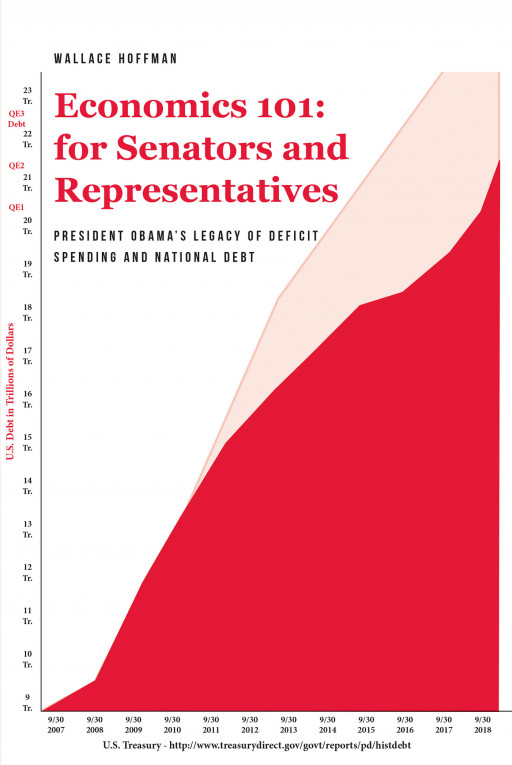 Wallace Hoffman, who earned a PhD degree from Ole Miss, served twenty-five years with the U.S. Air Force, and had a decades-long teaching career, has completed his new book, "Economics 101 for Senators and Representatives: President Obama's Legacy of Deficit Spending and National Debt": a thorough analysis of the ways in which the national debt and spending grew as the result of policy changes while President Obama was in office.

"The mission of this book is to inform all American citizens how their senators and representatives vote in Washington. Do your senators and your representative fulfill the responsibilities of government in the Constitution and vote in your favor? If that is true, they are your friends. Or do your senators and your representative violate the Constitution and vote against your best interest? If that is true, they are your enemies. If you vote for and reelect your enemies, they will be your enemies the next two or six years," writes Hoffman. "President Obama's legacy of deficit spending is characterized by average deficit spending of more than a trillion dollars annually. During those eight years, every American household went to bed each evening fifty dollars deeper in debt, regardless of how hard they worked or whether they spent any money. The national debt more than doubled during President Obama's eight years in office. Each person's share of debt increased from $30,000 to $70,000."

Published by Covenant Books of Murrells Inlet, South Carolina, Wallace Hoffman's new book is an eye-opening look at American economics and how it can be easily influenced by the will and biases of the politicians the American people elect to represent them.

Readers can purchase "Economics 101 for Senators and Representatives: President Obama's Legacy of Deficit Spending and National Debt" at bookstores everywhere, or online at the Apple iTunes store, Amazon, or Barnes & Noble.

Covenant books is an international Christian owned and operated publishing house based in Murrells Inlet, South Carolina. Covenant Books specializes in all genres of work which appeal to the Christian market. For additional information or media inquiries, contact Covenant Books at 843-507-8373.

Original Source: Author Wallace Hoffman's New Book 'Economics 101 for Senators and Representatives' is an Examination of the Ways in Which the National Debt Grew Under Obama's Presidency

Facebook
Twitter
Pinterest
WhatsApp
Previous article
Author James Smith’s New Book, ‘Life’s Little Lessons Too, a Proper Life With a Career’, is a Collection of Stories and Lessons From the Author’s Professional Life
Next article
Author Maricela B. Cruz’s New Book ‘Real Life Possibilities: Short Stories’ is a Compilation of Stories Highlighting the Ways in Which God’s Love and Mercy Uplift People
Art and Entertainment